As we set out, the children spotted several leafy branches that had fallen from a nearby eucalyptus tree. They held them aloft to shield their faces.

I’m trying to hide from the tigers. 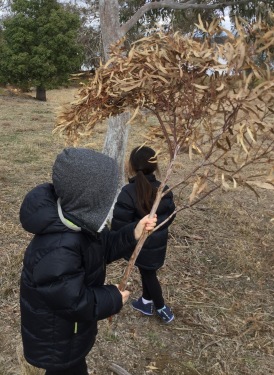 I saw the helicopter.

Let’s go down to near the water.

As the children rushed towards the lake, a few seemed reluctant to discard their  branches before moving on. One child took the time to pause and ‘plant’ his branch before following the others.

The helicopter remained an intermittent distraction through the first half of the walk. It hovered over a patch of water, circled and returned, performing this pattern a number of times with drill-like repetition.

The children’s attention moved seamlessly between the roaring engine above to other sightings along the lake’s edge. Their overlapping conversations echoed these shifts.

I saw something go down. Maybe that’s a meteor.
Gosh that’s so big. That’s really big.

It’s coming over this way
I saw that helicopter flying in the night out of my window.

See that branch. I can see a kind of flower on it.
I’ve got a big rock. 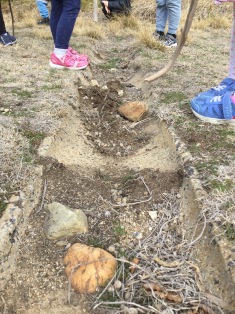 Eventually the helicopter flew away for good and a gentle silence seemed to linger in its wake. The children settled by the lake.

Their focus turned again to some discarded branches; this time covered in the soft ageing fronds of Casuarina trees.  The children dipped these into the lake, then lifted them to witness gentle drips of water.

Everyone grab a stick. 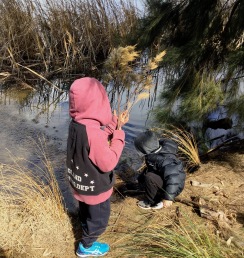 One child held their dripping stick over a nearby patch of grass:

I’m making some of these grow.

You get the water on the stick and then shake it, shake it off.

We were uncertain what prompted the children to start this rain-making activity. Was it that, after previous walks across a dusty landscape, they were intuitively aware of the need for rain? Or did the presence of the soft branches near the water’s edge, and the sunshine making its way through the branches, act as an invitation to reach out to the cool water and shower each other with glistening drops? 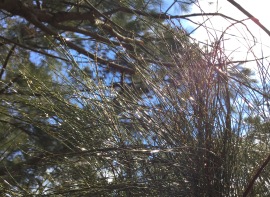 Either way, the children seemed captivated by this curious form of weathering-with the branches; shaping their own rain patterns and playing their own part in making weather.

A sound overhead once again drew their attention away from this activity with the branches. I can hear seagulls. Seagulls are coming, several children exclaimed.

It was time to head back, and as we walked the children mused on another weatherly interplay of light and rain

Purple and pink and yellow and all the rainbow colours,

I like all the bright colours and all the dark colours.

The light colours I like. And the lightest is the rainbow.