It rained lightly overnight for first time in a while.  As the fog lifted we found ourselves walking through a landscape that was damp and refreshed.

The children seemed to sense a new pliability in the earth. Several picked up sticks to dig at the ground, alternately tapping, drilling and scraping away the soft surface. 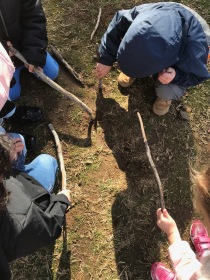 Down by the lake, we came across several eroded channels – more prominent than usual after the recent rain.

As first the children seemed captivated by the smooth watery surface of the lake, reaching out with their sticks as though to get close to the water.  The small ripples and gentle splashing sounds were witness to moments of connection. 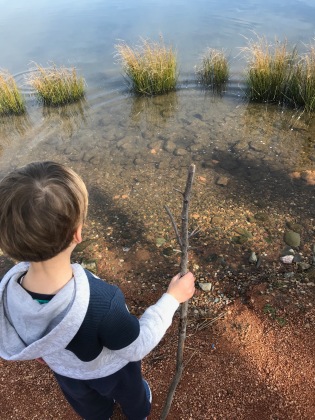 At one point, a child picked up a small clump of loosened dirt. Taking care to keep it whole, he placed it into the lake – look it dissolves he said.

We looked down at the bubbling piece of earth.  The particles of dirt seemed to be alive as they separated, spread out and eventually dissipated into the rocky bottom of the lake.

It’s going to melt. The dirt is gone.

These intimate exchanges between child, earth and water, made visible the ways that humans too are part of the constant shifting and shaping of geological matter. In small moments such as these, I wondered how the children experienced their own entanglement in the lively circulation of earthy materials. 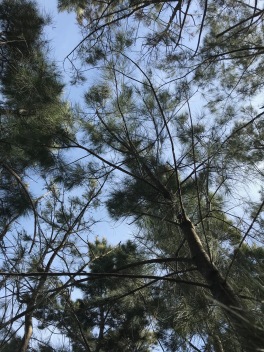 We re-joined a small group of children who were sitting on a patch of dry ground covered in casuarina fronds and seed pods.  They had collected sticks to use as hammers and drills, in order to create holes for little worms and bugs, to bury poo and plant seeds.

Brushing, digging, scraping, drilling and then folding earth back over seeds, they worked together and told stories that wove in and around their activities. They collected sticks, small branches and “seeds”.

One girl commented on things she found disconcerting. 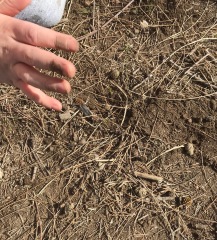 Despite this caution, she joined in with the others, seeking out new materials (including dirt and rabbit poo). When another child expressed fear about some birds approaching, the girl did not shy away, instead noting they are calling their chicks to come and get  food.

As the children were digging, they considered the dampness of the soil: Its wet and dry. No, its partly wet.  One child quietly placed a seed in the ground and covered it over, commenting: in 110 years it’ll grow into a very big tree. It needs sunshine and water.

On our return walk, a child stopped and looked up: ‘a big claw’ she said pointing to the clouds. Another girl had also noticed a thin white line across the sky: I see a contrail! That’s what an aeroplane makes.

We all lingered, slowing our pace so as not to miss the shifting and shaping of the clouds into new formations across the sky.